Seems like ages ago since frog spawn first arrived in my pond but not even four months on we’ve nearly got froglets . My own personal pest controllers in the making…

soon they will be all over the place and cutting my grass is about to become a real challenge but well worth it .

Guess he knows he’s being filmed!

Well the starlings are back and very busy . They’ve wasted no time in tucking into my mealworms . Mealworms are a popular choice of food at this time of year for most birds . Guess it’s a bit like a takeaway for them .” Fly through ” easy and convenient .

Hopefully I will get some youngster shots soon .

Why not try and put some mealworms out this weekend ?

So finally got back from Devon and what’s the first thing I want to do ? You’ve guessed it … look and see what my camera has captured! Well here goes ….

the usual suspect cat , I wonder what he’s up to ?

And at last- the one I was hoping for… a fox!

We’ve reset the camera at a different angle in the hope of getting more close-ups and clearer pictures of these lovely animals…watch this space!

Frogs and Toads are a huge part of our wildlife here in Britain, but do you know the differences between these to creatures?

I have both in my garden. What have you got?

Have you ever been in your garden and wondered how holes are appearing in the leaves of you shrubs ?

The culprit is a ” Leaf Cutter Bee”

This species of bee isn’t very big but they’re very industrious . The female cuts semicircular discs from your leaves to use in their nests . They usually nest in small crevices in rotten wood .

Next time your in your garden if you notice holes in your leaves . Keep an eye out as they will be back and it’s pretty awesome to watch!

So I’ve taken the plunge… I’ve decided to get a Wildlife Camera.

I’m up at 3.30 every morning and I always hear noises outside, and I’m hoping I will be able to capture the culprits .

I’m suspecting they are foxes as they are digging up holes near my compost bin .

So I’m hoping to capture these lovely animals on camera. Maybe even some cubs if I’m lucky. If I do, I will be sure to update you all!

I think it’s a shame that our native mammal is classed as vermin … what do you think?

Frogs or toads what can I say , they’re marmite aren’t they ? You either love them or hate them !

They’re a natural pesticide. Yes they’re slimy and yes they’re cold but they will reduce the need for slug pellets which are harmful to pets and other invertebrates which are so important to the natural balance of the landscape ,

I love it in the summer when there’s a rainstorm .they all come out of the woodwork.

This mild spring has caused me an issue . I don’t think I’ve ever seen so many tadpoles in my pond . So I’m going to give them a bit of extra help as the pond isn’t big enough to sustain this many. You find out more in my Frog Spawn and Tadpoles post…

The main thing which helps keep these little creatures thriving is regular water top ups to help keep the water fresh . And plenty of pond weed to oxygenate it.

Also I’m going to feed them . Any freshwater fish food will do- however pellets are better as they float on the surface. I also slice up any leftover cucumber and throw that in. You could even throw them a few bits of raw chicken or beef (the bits you cut off and usually throw in the bin) and they love it- but if your struggling to keep the water fresh leave this out. If you look after your tadpoles in this way, soon enough you’ll have loads of tiny froglets emerging from your pond!

I will of course be sharing regular updates on my tadpoles as they develop fully into frogs.

Ever seen one of these in your garden ? 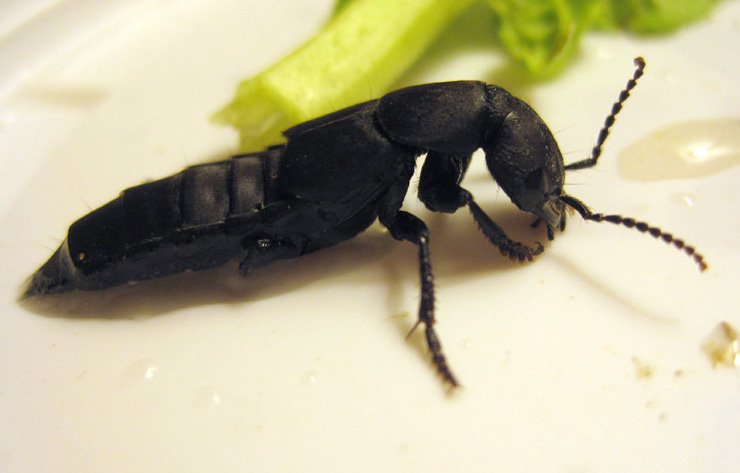 This a a Devil’s Coachman.

These are very good natural pesticide . They eat slugs , spiders,  fly larvae and other invertebrates .

It’s rare you’ll see them in the day as they’re nocturnal and like to hide in damp crevices or rotting wood .

If you go to touch one it will rear its hind quarters like a scorpion and opens its jaw and it can give a nasty bite if it’s really threatened .

However they are a real gardeners friend so be glad you’ve got them in your garden.

This less aggressive beetle has similar tastes  to the devils coachman and will also feed on carrion (dead animals) – which is great for us because it gets rids of waste.

Females lay their eggs in soil and the larvae emerge as active feeders themselves.

I never said all nature was beautiful . But there is a balance where everything has its role to play. So remember that if you see these creatures in your garden, don’t hurt them, they are there to help!

Why isn’t more being done to save our bees ? Neonicotinoids are believed to result in a decline of the queen bees’ life span in colonies. This causes stress on worker bees to almost constantly raise a queen bee, leading them to try and forage while too young and to often die from this dangerous task.
The truth is that without the bee to pollinate our flowers , trees and crops we will starve .

What makes things worse is it’s all our fault Pesticides!

So the only thing we can do is ,

do our bit . Planting bee friendly plants as in my previous blog . But also reduce or stop the use of chemicals .

If you have got a medium sized garden try to loosen up on the weeding as these are a vital natural food source . Or maybe dedicate one small section of your garden to allow those ugly weeds that the bees need to feed well .

Oh and please leave some water out even just a small dishful can make all the difference!

Flower of The Month

Hi, I'm Dee and I work in retail, but my real passion is the environment. Not what it can do for me but what I can do for it . I have a medium sized garden. Yes it's not immaculate but neither is the real world. It's my personal space and it attracts a whole range of wildlife from insects to animals. Its my own Flixton nature reserve where all animals and insects are welcome . I can show you how pretty much use any food you'd normally throw away- and how it can be reused in one way or another to encourage the right birds and insects to prevent or reduce the need for chemicals. Also I will be showing you places around the UK, mainly Northwest, where you can enjoy nature and that are dog friendly. Alongside my daughters blog- Wag Yourself Happy- where she's always tagging my pooches . Hope you like my page!